Consider this BiteByte of truth.  The distribution of God’s laws expressed in the historical record of the bible reflect a movement from a Theocratic form of Government to a Inner Kingdom based Government.

Old Testament Prophesies the coming of the New Covenant.

Heb 8:10  This is the covenant I will establish with the people of Israel after that time, declares the Lord. I will put my laws in their minds and write them on their hearts. I will be their God, and they will be my people.

In fact 613 laws that were used to direct the Jewish Nation’s Theocracy probably sounds like a lot laws.

When the Messiah arrives he specifically indicates that he is delivering new commandments and not breaking the Old Testament Laws but fulfilling them.

Jesus declares his commandments which are there for the new Kingdom. 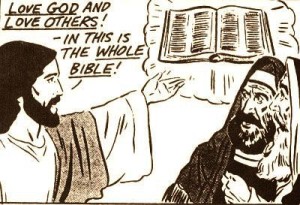