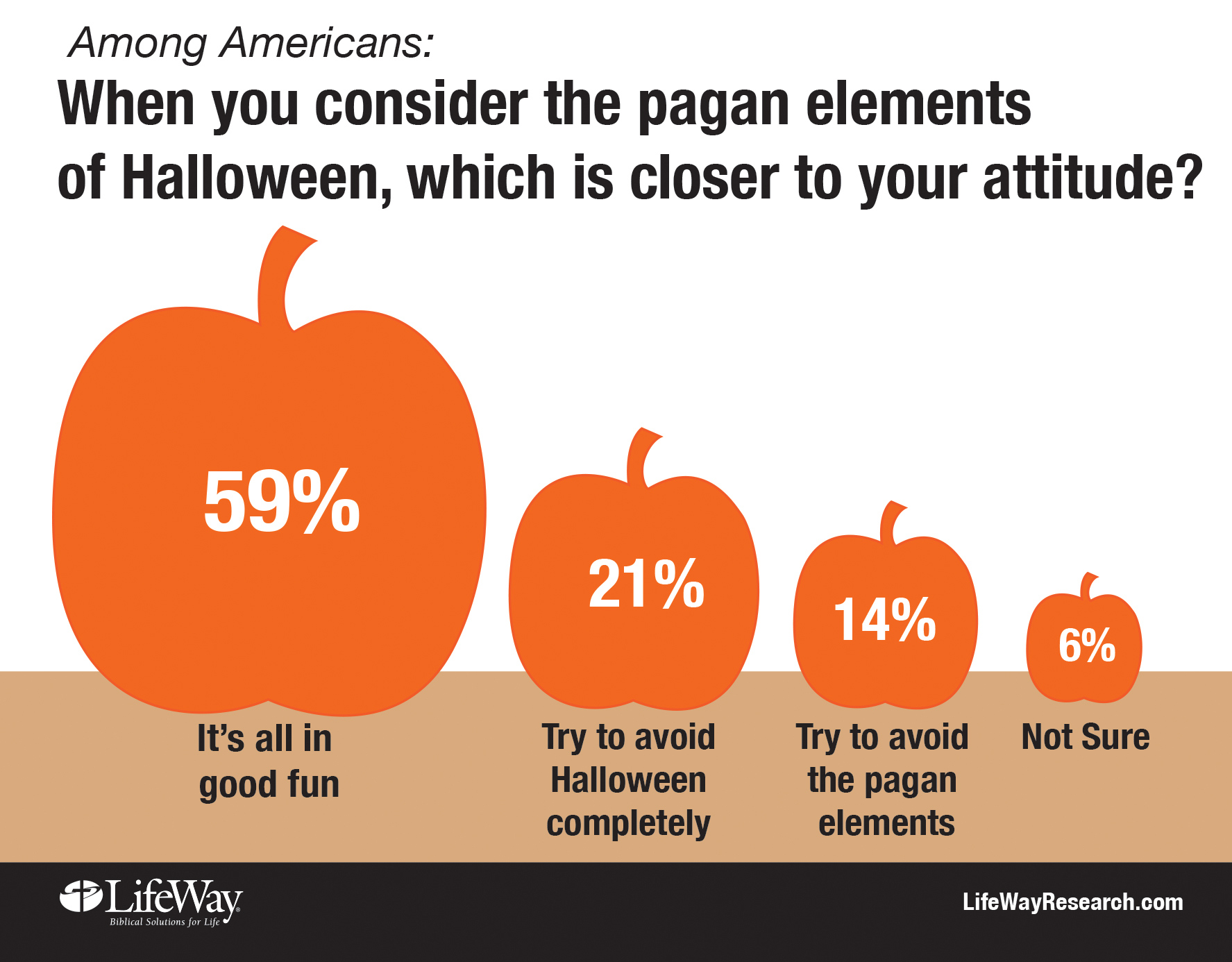 Many Christians view Halloween in such a negative light that they choose to avoid any recognition of the day while others view it as all in good fun.  Still others view it something they can live with as long they avoid the “Pagan” elements.

Lifeway Poll Baptist press news. Yet, one-third say they avoid
Depending on what poll you use as many as 1/3 of Americans avoid Halloween or its pagan elements.

Before I leave the BiteByte of Wisdom with you for your consideration lets look at the growth of Halloween as taken from this great Baptist Press Article:

Church attendance also affects Americans’ views of Halloween. Those attending a religious service once a week or more are the least likely to say Halloween is all in good fun (44 percent), compared to those attending once or twice a month (68 percent) or only on religious holidays (82 percent).

“More than two-thirds of evangelicals welcome the candy, costumes, or community interaction surrounding the holiday, but the majority are unwilling to label ‘the pagan elements of Halloween’ good.” McConnell said.

Americans are separated by geography as well as age when it comes to attitudes toward Halloween.

Southerners (27 percent) are more likely than those in the West (19 percent), Midwest (18 percent) and Northeast (12 percent) to say they try to avoid Halloween completely.

Methodology: The phone survey of Americans was conducted Sept. 14-28, 2015. The calling utilized random digit dialing. Fifty percent of completes were among landlines and 50 percent were among cellphones. Maximum quotas and slight weights were used for gender, region, age, ethnicity and education to more accurately reflect the population. The completed sample is 1,000 surveys. The sample provides 95 percent confidence that the sampling error does not exceed plus or minus 3.6 percent. Margins of error are higher in subgroups.

LifeWay Research, based in Nashville, is an evangelical research firm that specializes in surveys about faith in culture and matters that affect the church.

Jos 7:1 BUT THE Israelites committed a trespass in regard to the devoted things; for Achan son of Carmi, the son of Zabdi, the son of Zerah, of the tribe of Judah, took some of the things devoted [for destruction]. And the anger of the Lord burned against Israel.
Jos 7:2 Joshua sent men from Jericho to Ai, which is near Beth-aven, east of Bethel, and said to them, Go up and spy out the land. So the men went up and spied out Ai.
Jos 7:3 And they returned to Joshua and said to him, Let not all the men go up; but let about two thousand or three thousand go up and attack Ai; do not make the whole army toil up there, for they of Ai are few.
Jos 7:4 So about three thousand Israelites went up there, but they fled before the men of Ai.
Jos 7:5 And the men of Ai killed about thirty-six of them, for they chased them from before the gate as far as Shebarim, and slew them at the descent. And the hearts of the people melted and became as water.
Jos 7:6 Then Joshua rent his clothes and lay on the earth upon his face before the ark of the Lord until evening, he and the elders of Israel; and they put dust on their heads.
Jos 7:7 Joshua said, Alas, O Lord God, why have You brought this people over the Jordan at all only to give us into the hands of the Amorites to destroy us? Would that we had been content to dwell beyond the Jordan!
Jos 7:8 O Lord, what can I say, now that Israel has turned to flee before their enemies!
Jos 7:9 For the Canaanites and all the inhabitants of the land will hear of it and will surround us and cut off our name from the earth. And what will You do for Your great name?
Jos 7:10 The Lord said to Joshua, Get up! Why do you lie thus upon your face?
Jos 7:11 Israel has sinned; they have transgressed My covenant which I commanded them. They have taken some of the things devoted [for destruction]; they have stolen, and lied, and put them among their own baggage.
Jos 7:12 That is why the Israelites could not stand before their enemies, but fled before them; they are accursed and have become devoted [for destruction]. I will cease to be with you unless you destroy the accursed [devoted] things among you.
Jos 7:13 Up, sanctify (set apart for a holy purpose) the people, and say, Sanctify yourselves for tomorrow; for thus says the Lord, the God of Israel: There are accursed things in the midst of you, O Israel. You can not stand before your enemies until you take away from among you the things devoted [to destruction].
Jos 7:14 In the morning therefore, you shall present your tribes. And the tribe which the Lord takes shall come by families; and the family which the Lord takes shall come by households; and the household which the Lord takes shall come by persons.
Jos 7:15 And he who is taken with the devoted things shall be [killed and his body] burned with fire, he and all he has, because he has transgressed the covenant of the Lord and because he has done a shameful and wicked thing in Israel. [Josh. 7:25.]