Meddle not with the rebellious…
Shabbat thought

There is a book “Lawyers without Rights” by Simone Ladwig-Winters originally written some two decades ago that details the expulsion of Jewish judges and lawyers after Hitler’s ascension as Chancellor in 1933.  If Jews wanted to continue to practice law, they had to re-apply and give allegiance to Hitler’s government, which meant that they accepted the legal situation of anti-Semitism, with no way to combat it legally.

It shows how the rule of law and how we corporately or individually define justice can be a catch-22. We’ve asked for men as kings, having rejected His Torah, and are reaping the consequences as predicted.  If you name the name of Yeshua as your Master and Savior, then read on, but if not, don’t bother…

The King of Kings, Master of the Universe, our Judge, spoke to His people and told us all: “Do not judge in order that you will not be judged!

In whatever judgment that you judge, you will be judged And with whatever measure you measure, it will be measured again to you!” Mat’ 7:1,2

This week’s Haftarah in Shoftim (Judges) 13 deserves an in-depth read considering our situation. And how people bandy about terms like legal, law, justice, etc. without being really concerned with His righteousness and justice being applied in and to our own lives… i.e. self-righteousness abounds!

Judge or Krino [κρίνω] goes back to our word Shafat in the Sept. for שָׁפַט, and also for דּוּן and רִיב; In Hebrew it has the sense of judging, governing, deciding controversy and even punishing. The rabbis decided for some reason to leave out the first verse of Shoftim 13 in the Haftarah; however, we should consider it rather important contextually both to Yisrael and to us:

א  וַיֹּסִיפוּ בְּנֵי יִשְׂרָאֵל, לַעֲשׂוֹת הָרַע בְּעֵינֵי יְהוָה; וַיִּתְּנֵם יְהוָה בְּיַד-פְּלִשְׁתִּים, אַרְבָּעִים שָׁנָה.  {פ}      1
And the sons of Yisrael increased to do the evil in the eyes of YHVH; and YHVH gave them into the hand of the Wanderers, forty years.

In other words, YHVH is judging His people, and Keyfa (Peter) affirms this to those of us, who name His name and abide in His commands that we can expect this to happen… Beloved, do not be bewildered at the pyro-purge of proving (see Prov 27:21) as if something strange was happening among you,

But as you have shared in the sufferings of Messiah, rejoice!
So that also in the unveiling of His glory, you all might rejoice exulting.
If you are insulted for the name of Messiah, [you are] blessed, because the glory and Spirit of YHVH remains on you.  Indeed on their part He is reviled, however on you all He is glorified.

None of you should suffer as a murderer or thief or wrongdoer, or as a meddler, (the writer seems to refer to those who, with holy but intemperate zeal, meddle with the affairs of the Gentiles — whether public or private, civil or sacred — in order to make them conform to the Christian standard – Thayer’s Greek Lexicon)

If you [suffer] as a Christian, do not be ashamed, but glorify YHVH that you bear that name.

For it is time for judgment to have begun with the house of YHVH; and if it is first with us, what’s the end of those disobeying YHVH’s good news?

And, “If it is difficult for the righteous to be saved, what will be of the ungodly and the sinner?”

לא  הֵן צַדִּיק, בָּאָרֶץ יְשֻׁלָּם;    אַף, כִּי-רָשָׁע וְחוֹטֵא.
“Look, the righteous will be repaid in the earth; how much more the wicked and the sinner!”

It’s interesting how Keyfa quotes a verse in which we should consider the preceding verse also: “The fruit of the righteous is a tree of life; and a wise one wins souls.” Verse :30

In regards to our responsibility of fruit from verse 30, and what the consequences of 31 are, it’s a travesty that people who name the name of Jesus are meddling with false expectations, judging others according to a bankrupt legal system under judgment for corruption, hence being compromised with accusations and disobedient to the One who they claim to follow.

There was a way out for the Jews in Western Europe during the ‘30’s – Elie Wiesel among others documented this, when YHVH sent prophets to tell the Jews to get out and go back to Yisrael…most didn’t listen and perished – it doesn’t make the horror of Shoah right, but in order to fight evil and man’s depravity, we can’t do it on our own strength, wisdom, and self-righteousness…

There is a way out for the ‘followers’ of Messiah today in the West or wherever – pick up our crosses and follow Him daily, abide in His commands, don’t meddle in the world, or expect those who do evil to conform to some euphemistic standard or expectation we would establish…

Blasphemy is currently in the top 30% of lookups on Merriam-Webster.com.

: great disrespect shown to God or to something holy

: something said or done that is disrespectful to God or to something holy

11 The son of the Israelite woman blasphemed the Name with a curse; so they brought him to Moses.

1. The name of Lord is Holy.  “Our Father, which art in heaven, HALLOWED be thy name”.   “Thou shalt no take the name of the Lord thy God in vain.

Lev 24:12 They put him in custody until the will of the LORD should be made clear to them.

1. The young man was locked up, in jail, in waiting for blasphemy.
2. They weren’t sure what the punishment or consequences should be but they knew they should ask God for direction.

3. Moses was a prophet and this was a nation that was created and led by God.

4. Moses got a clear answer from the Lord.

Lev 24:14 “Take the blasphemer outside the camp. All those who heard him are to lay their hands on his head, and the entire assembly is to stone him.
Lev 24:15 Say to the Israelites: ‘Anyone who curses their God will be held responsible;
Lev 24:16 anyone who blasphemes the name of the LORD is to be put to death. The entire assembly must stone them. Whether foreigner or native-born, when they blaspheme the Name they are to be put to death.

Every civilized society creates laws and also creates punishments for those that break the laws.

One of the most basic responsibilities of a civil society to design laws where the punishments are appropriate to the crimes that are committed.

The covenant journey stands in history as easily one of the most important trips of the all human history.

The covenant trip was an agreement with God and Israel on a journey that would take them from bondage to a promised land of great blessing.

BiteByte on this, the broken covenant contract turned a journey to a land of milk and honey into a death trip ending with many of their bones in the wilderness.    Selah

11 The waters covered their adversaries;
not one of them survived. 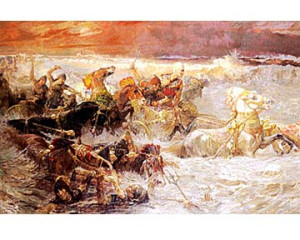 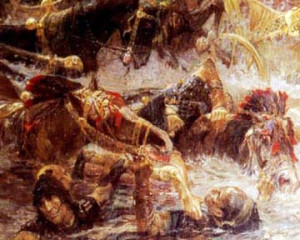 12 Then they believed his promises
and sang his praise.

13 But they soon forgot what he had done
and did not wait for his plan to unfold.

14 In the desert they gave in to their craving;
in the wilderness they put God to the test.

15 So he gave them what they asked for,
but sent a wasting disease among them.