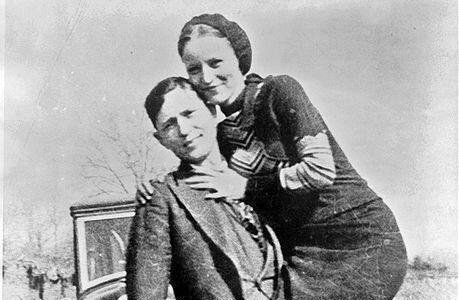 The love between a man and a woman is an awesome thing, invented and created by God himself!

Matthew 19:4
Jesus answered, “Have you not read that from the beginning the Creator ‘made them male and female‘

But when the Creator and His plan of righteousness is removed from the picture, the picture is no longer complete.

Bonnie and Clyde are an example of that bond between woman and man but without the love of God to make it all complete.  – Selah 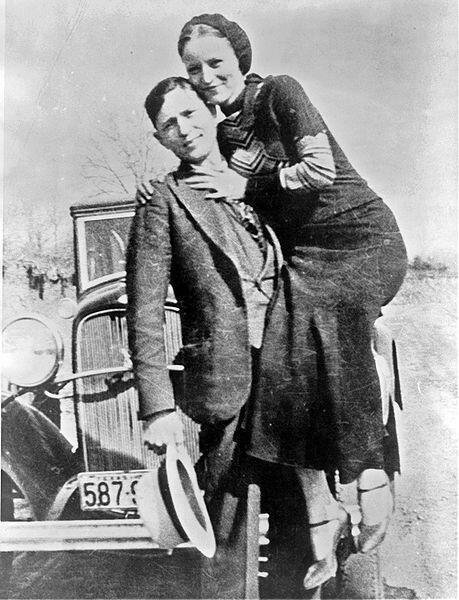 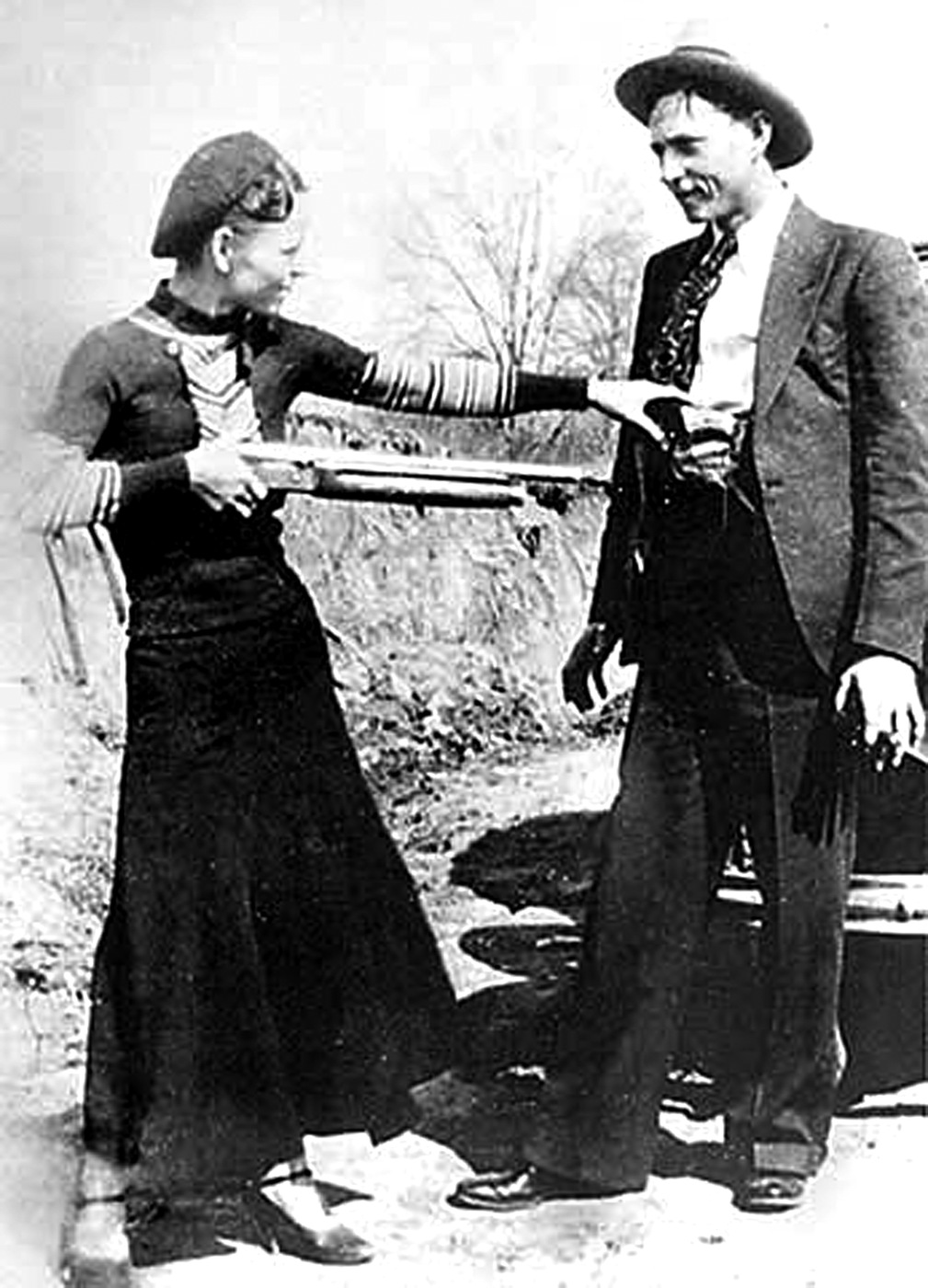 Clyde Champion Barrow and his companion, Bonnie Parker, were shot to death by officers in an ambush near Sailes, Bienville Parish, Louisiana on May 23, 1934, after one of the most colorful and spectacular manhunts the nation had seen up to that time.

Barrow was suspected of numerous killings and was wanted for murder, robbery, and state charges of kidnapping.

The FBI, then called the Bureau of Investigation, became interested in Barrow and his paramour late in December 1932 through a singular bit of evidence. A Ford automobile, which had been stolen in Pawhuska, Oklahoma, was found abandoned near Jackson, Michigan in September of that year. At Pawhuska, it was learned another Ford car had been abandoned there which had been stolen in Illinois. A search of this car revealed it had been occupied by a man and a woman, indicated by abandoned articles therein. In this car was found a prescription bottle, which led special agents to a drug store in Nacogdoches, Texas, where investigation disclosed the woman for whom the prescription had been filled was Clyde Barrow’s aunt.

Further investigation revealed that the woman who obtained the prescription had been visited recently by Clyde Barrow, Bonnie Parker, and Clyde’s brother, L. C. Barrow. It also was learned that these three were driving a Ford car, identified as the one stolen in Illinois. It was further shown that L. C. Barrow had secured the empty prescription bottle from a son of the woman who had originally obtained it.

On May 20, 1933, the United States Commissioner at Dallas, Texas, issued a warrant against Clyde Barrow and Bonnie Parker, charging them with the interstate transportation, from Dallas to Oklahoma, of the automobile stolen in Illinois. The FBI then started its hunt for this elusive pair.

Bonnie and Clyde met in Texas in January, 1930. At the time, Bonnie was 19 and married to an imprisoned murderer; Clyde was 21 and unmarried. Soon after, he was arrested for a burglary and sent to jail. He escaped, using a gun Bonnie had smuggled to him, was recaptured and was sent back to prison. Clyde was paroled in February 1932, rejoined Bonnie, and resumed a life of crime.

In addition to the automobile theft charge, Bonnie and Clyde were suspects in other crimes. At the time they were killed in 1934, they were believed to have committed 13 murders and several robberies and burglaries. Barrow, for example, was suspected of murdering two police officers at Joplin, Missouri and kidnapping a man and a woman in rural Louisiana. He released them near Waldo, Texas. Numerous sightings followed, linking this pair with bank robberies and automobile thefts. Clyde allegedly murdered a man at Hillsboro, Texas; committed robberies at Lufkin and Dallas, Texas; murdered one sheriff and wounded another at Stringtown, Oklahoma; kidnaped a deputy at Carlsbad, New Mexico; stole an automobile at Victoria, Texas; attempted to murder a deputy at Wharton, Texas; committed murder and robbery at Abilene and Sherman, Texas; committed murder at Dallas, Texas; abducted a sheriff and the chief of police at Wellington, Texas; and committed murder at Joplin and Columbia, Missouri.

Later in 1932, Bonnie and Clyde began traveling with Raymond Hamilton, a young gunman. Hamilton left them several months later and was replaced by William Daniel Jones in November 1932.

Ivan M. “Buck” Barrow, brother of Clyde, was released from the Texas State Prison on March 23, 1933, having been granted a full pardon by the governor. He quickly joined Clyde, bringing his wife, Blanche, so the group now numbered five persons. This gang embarked upon a series of bold robberies which made headlines across the country. They escaped capture in various encounters with the law. However, their activities made law enforcement efforts to apprehend them even more intense. During a shootout with police in Iowa on July 29, 1933, Buck Barrow was fatally wounded and Blanche was captured. Jones, who was frequently mistaken for “Pretty Boy” Floyd, was captured in November 1933 in Houston, Texas by the sheriff’s office. Bonnie and Clyde went on together. 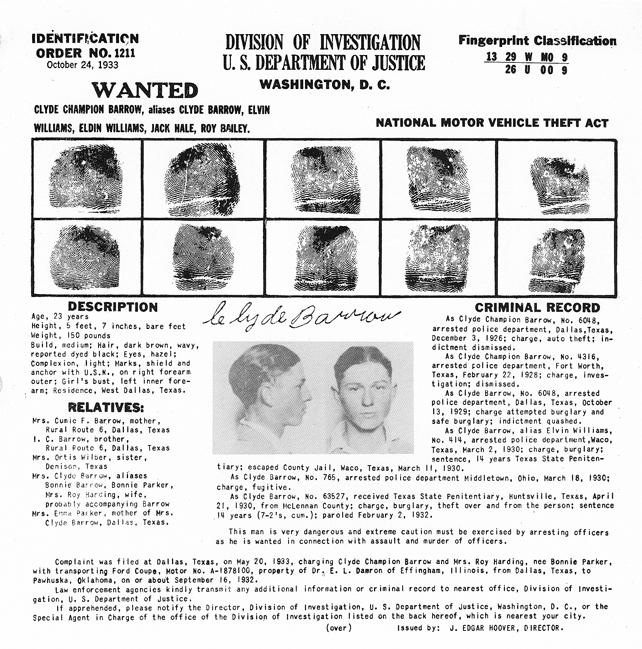 On November 22, 1933, a trap was set by the Dallas, Texas sheriff and his deputies in an attempt to capture Bonnie and Clyde near Grand Prairie, Texas, but the couple escaped the officer’s gunfire. They held up an attorney on the highway and took his car, which they abandoned at Miami, Oklahoma. On December 21, 1933, Bonnie and Clyde held up and robbed a citizen at Shreveport, Louisiana.

On January 16, 1934, five prisoners, including Raymond Hamilton (who was serving sentences totaling more than 200 years), were liberated from the Eastham State Prison Farm at Waldo, Texas by Clyde Barrow, accompanied by Bonnie Parker. Two guards were shot by the escaping prisoners with automatic pistols, which had been previously concealed in a ditch by Barrow. As the prisoners ran, Barrow covered their retreat with bursts of machine-gun fire. Among the escapees was Henry Methvin of Louisiana.

On April 1, 1934, Bonnie and Clyde encountered two young highway patrolmen near Grapevine, Texas. Before the officers could draw their guns, they were shot. On April 6, 1934, a constable at Miami, Oklahoma fell mortally wounded by Bonnie and Clyde, who also abducted a police chief, whom they wounded. 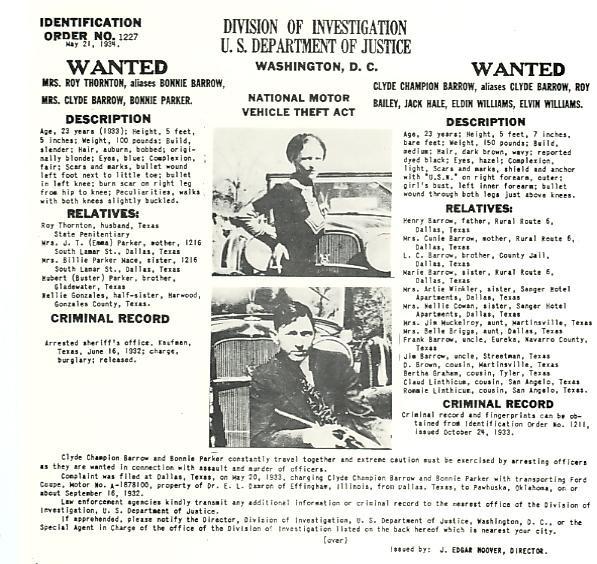 The FBI had jurisdiction solely on the charge of transporting a stolen automobile, although the activities of the Bureau agents were vigorous and ceaseless. Every clue was followed. “Wanted notices” furnishing fingerprints, photograph, description, criminal record, and other data were distributed to all officers. The agents followed the trail through many states and into various haunts of the Barrow gang, particularly Louisiana. The association with Henry Methvin and the Methvin family of Louisiana was discovered by FBI agents, and they found that Bonnie and Clyde had been driving a car stolen in New Orleans.

On April 13, 1934, an FBI agent, through investigation in the vicinity of Ruston, Louisiana, obtained information which definitely placed Bonnie and Clyde in a remote section southwest of that community. The home of the Methvins was not far away, and the agent learned of visits there by Bonnie and Clyde. Special agents in Texas had learned that Clyde and his companion had been traveling from Texas to Louisiana, sometimes accompanied by Henry Methvin.

The FBI and local law enforcement authorities in Louisiana and Texas concentrated on apprehending Bonnie and Clyde, whom they strongly believed to be in the area. It was learned that Bonnie and Clyde, with some of the Methvins, had staged a party at Black Lake, Louisiana on the night of May 21, 1934 and were due to return to the area two days later. 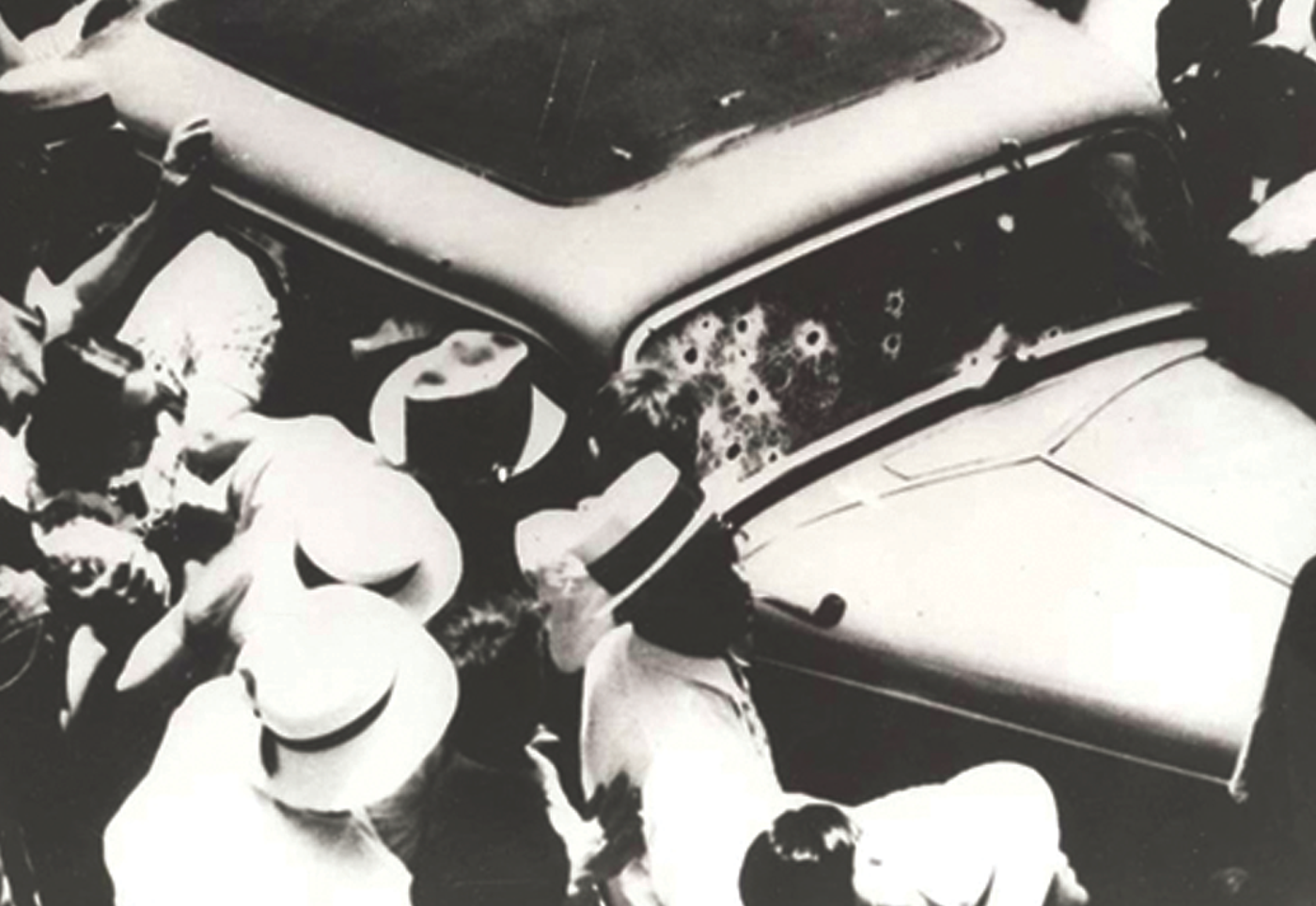 Before dawn on May 23, 1934, a posse composed of police officers from Louisiana and Texas, including Texas Ranger Frank Hamer, concealed themselves in bushes along the highway near Sailes, Louisiana. In the early daylight, Bonnie and Clyde appeared in an automobile and when they attempted to drive away, the officers opened fire. Bonnie and Clyde were killed instantly.