Scientists that ‘get it’ Pt. 1 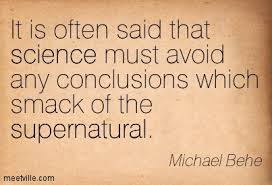 World renowned scientists, physicists and Nobel Prize winners on the subject of a creator:  Source

Does science lead us down a road that ends in the naturalistic explanation of everything we see? In the nineteenth century, it certainly looked as though science was going in that direction.The “God of the gaps” was finding himself in a narrower and narrower niche. However, 20th century and now 21st century science is leading us back down the road of design – not from a lack of scientific explanation, but from scientific explanation that requires an appeal to the extremely unlikely – something that science does not deal well with. As a result of the recent evidence in support of design, many scientists now believe in God. According to a recent article:

“I was reminded of this a few months ago when I saw a survey in the journal Nature. It revealed that 40% of American physicists, biologists and mathematicians believe in God–and not just some metaphysical abstraction, but a deity who takes an active interest in our affairs and hears our prayers: the God of Abraham, Isaac and Jacob.”(1)

The degree to which the constants of physics must match a precise criteria is such that a number of agnostic scientists have concluded that there is some sort of “supernatural plan” or “Agency” behind it.

Here is what they say: The quotes

Fred Hoyle (British astrophysicist): “A common sense interpretation of the facts suggests that a superintellect has monkeyed with physics, as well as with chemistry and biology, and that there are no blind forces worth speaking about in nature. The numbers one calculates from the facts seem to me so overwhelming as to put this conclusion almost beyond question.” (2)

George Ellis (British astrophysicist): “Amazing fine tuning occurs in the laws that make this [complexity] possible. Realization of the complexity of what is accomplished makes it very difficult not to use the word ‘miraculous’ without taking a stand as to the ontological status of the word.” (3)

Paul Davies (British astrophysicist): “There is for me powerful evidence that there is something going on behind it all….It seems as though somebody has fine-tuned nature’s numbers to make the Universe….The impression of design is overwhelming”. (4)

Paul Davies: “The laws [of physics] … seem to be the product of exceedingly ingenious design… The universe must have a purpose”. (5)

Alan Sandage (winner of the Crawford prize in astronomy): “I find it quite improbable that such order came out of chaos. There has to be some organizing principle. God to me is a mystery but is the explanation for the miracle of existence, why there is something instead of nothing.” (6)

John O’Keefe (astronomer at NASA): “We are, by astronomical standards, a pampered, cosseted, cherished group of creatures.. .. If the Universe had not been made with the most exacting precision we could never have come into existence. It is my view that these circumstances indicate the universe was created for man to live in.” (7)

George Greenstein (astronomer): “As we survey all the evidence, the thought insistently arises that some supernatural agency – or, rather, Agency – must be involved. Is it possible that suddenly, without intending to, we have stumbled upon scientific proof of the existence of a Supreme Being? Was it God who stepped in and so providentially crafted the cosmos for our benefit?” (8)

Arthur Eddington (astrophysicist): “The idea of a universal mind or Logos would be, I think, a fairly plausible inference from the present state of scientific theory.” (9)

Arno Penzias (Nobel prize in physics): “Astronomy leads us to a unique event, a universe which was created out of nothing, one with the very delicate balance needed to provide exactly the conditions required to permit life, and one which has an underlying (one might say ‘supernatural’) plan.” (10)

Roger Penrose (mathematician and author): “I would say the universe has a purpose. It’s not there just somehow by chance.” (11)

Tony Rothman (physicist): “When confronted with the order and beauty of the universe and the strange coincidences of nature, it’s very tempting to take the leap of faith from science into religion. I am sure many physicists want to. I only wish they would admit it.” (12)

Vera Kistiakowsky (MIT physicist): “The exquisite order displayed by our scientific understanding of the physical world calls for the divine.” (13)

Robert Jastrow (self-proclaimed agnostic): “For the scientist who has lived by his faith in the power of reason, the story ends like a bad dream. He has scaled the mountains of ignorance; he is about to conquer the highest peak; as he pulls himself over the final rock, he is greeted by a band of theologians who have been sitting there for centuries.” (14)

Stephen Hawking (British astrophysicist): “Then we shall… be able to take part in the discussion of the question of why it is that we and the universe exist. If we find the answer to that, it would be the ultimate triumph of human reason – for then we would know the mind of God.” (15)

Frank Tipler (Professor of Mathematical Physics): “When I began my career as a cosmologist some twenty years ago, I was a convinced atheist. I never in my wildest dreams imagined that one day I would be writing a book purporting to show that the central claims of Judeo-Christian theology are in fact true, that these claims are straightforward deductions of the laws of physics as we now understand them. I have been forced into these conclusions by the inexorable logic of my own special branch of physics.” (16) Note: Tipler since has actually converted to Christianity, hence his latest book,

The Physics of Christianity

Alexander Polyakov (Soviet mathematician): “We know that nature is described by the best of all possible mathematics because God created it.”(17)

Ed Harrison (cosmologist): “Here is the cosmological proof of the existence of God – the design argument of Paley – updated and refurbished. The fine tuning of the universe provides prima facie evidence of deistic design. Take your choice: blind chance that requires multitudes of universes or design that requires only one…. Many scientists, when they admit their views, incline toward the teleological or design argument.” (18)

Edward Milne (British cosmologist): “As to the cause of the Universe, in context of expansion, that is left for the reader to insert, but our picture is incomplete without Him [God].” (19)

Barry Parker (cosmologist): “Who created these laws? There is no question but that a God will always be needed.” (20)

Drs. Zehavi, and Dekel (cosmologists): “This type of universe, however, seems to require a degree of fine tuning of the initial conditions that is in apparent conflict with ‘common wisdom’.” (21)

Arthur L. Schawlow (Professor of Physics at Stanford University, 1981 Nobel Prize in physics): “It seems to me that when confronted with the marvels of life and the universe, one must ask why and not just how. The only possible answers are religious. . . . I find a need for God in the universe and in my own life.” (22)

Henry “Fritz” Schaefer (Graham Perdue Professor of Chemistry and director of the Center for Computational Quantum Chemistry at the University of Georgia): “The significance and joy in my science comes in those occasional moments of discovering something new and saying to myself, ‘So that’s how God did it.’ My goal is to understand a little corner of God’s plan.” (23)

Wernher von Braun (Pioneer rocket engineer) “I find it as difficult to understand a scientist who does not acknowledge the presence of a superior rationality behind the existence of the universe as it is to comprehend a theologian who would deny the advances of science.” (24)

Carl Woese (microbiologist from the University of Illinois) “Life in Universe – rare or unique? I walk both sides of that street. One day I can say that given the 100 billion stars in our galaxy and the 100 billion or more galaxies, there have to be some planets that formed and evolved in ways very, very like the Earth has, and so would contain microbial life at least. There are other days when I say that the anthropic principal, which makes this universe a special one out of an uncountably large number of universes, may not apply only to that aspect of nature we define in the realm of physics, but may extend to chemistry and biology. In that case life on Earth could be entirely unique.” (25)

Antony Flew (Professor of Philosophy, former atheist, author, and debater) “It now seems to me that the findings of more than fifty years of Deoxyribonucleic acid: the chemical inside the nucleus of a cell that carries the genetic instructions for making living organisms.DNA research have provided materials for a new and enormously powerful argument to design.” (26)

Frank Tipler (Professor of Mathematical Physics): “From the perspective of the latest physical theories, Christianity is not a mere religion, but an experimentally testable science.” (27)