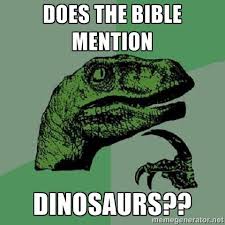 BST BiteByte: Bible believers should have the best view of both Science & History because they add to their knowledge information accessed by Spiritual Revelation.   The secular person is blinded and oblivious to this entire paradigm of truth and reality.

As we have seen in this series the existence of Dinosaurs were recognized and revealed in the oldest manuscript of the Bible, the book of Job.

We have also seen here on BiteSizedTruth.com that the Bible does not definitively state anything about how old the earth itself is, only the relative age of the Adam of Eve Generation can be estimated from scripture along with historical and archaeological observation.

In addition to mentioning these giant reptiles, the Bible describes a couple of creatures in such a way that some scholars believe the writers may have been describing dinosaurs. The behemoth is said to be the mightiest of all God’s creatures, a giant whose tail is